The Ulster Historical Foundation's Dr. William Roulston has certainly been a busy man in the lockdown. Not content with having recently produced an updated and substantially enhanced version of his highly useful Researching Scots-Irish Ancestors book, he has turned his attention this year to producing a new and equally useful guide on one of the largest Protestant denominations in Ireland, and in particular the province of Ulster, that of Presbyterianism, in all its many shades.

Presbyterianism is a denomination which originated from the Scottish Reformation of 1560, and which made its way, cautiously at first, to the province of Ulster in the early 1600s, before the first formal presbytery was established in my home town of Carrickfergus in Co. Antrim in 1642, following the arrival of a Scottish Covenanting army into Ireland. As a child, I attended First Presbyterian Church in Carrickfergus, and for a time Second Presbyterian Church in Carrickfergus (where I lived practically next door for 2 years!), and it was great upon opening the book to see an image of the latter church on the inside cover. As a boy I attended the Sunday School, the Boys Brigade, the church youth clubs, and more, within a thoroughly Presbyterian upbringing, something which has stayed to me to this day despite a lapse in religious belief (I astonished a Burns Supper in Ayrshire a few years ago by stating that the portrait of Robert Burns on the stage behind me was simply idolatry - it was his works I was interested in, not his image!). But despite this background, I did not really understand how the Presbyterian Church quite worked in Ireland. It never really occurred to me to ask why there was a 1st Presbyterian, 2nd Presbyterian, etc in Carrick - as far as I was concerned it just meant more BB companies in our local battalion. It turns out there was a reason, and this is where William's book comes in.

As a genealogist based in Scotland I have long held a deep understanding here of the role of the Presbyterian Kirk, the fundamental struggles it went through for its first 130 years of existence as a grass-roots based democratic body in opposition to the top down Anglican, episcopal pressures it experienced when confronting the Stuart monarchy, the significance of the National Covenant of 1638, the effect of the Glorious Revolution of 1689 in eventually securing its Presbyterian form, the subsequent impact of the issue of patronage in the 18th and 19th centuries which led to several schisms from the Kirk, and the eventual defeat of its aims in securing a Godly Commonwealth in Scotland, with the church and state working hand in hand, but dancing to the Kirk's tune. So Presbyterianism in Ireland should really be much of the same thing then, shouldn't it, particularly as these same Scots took their doctrine to Ireland during the Plantations? Well - not quite. Or to be more accurate, no, not really, but sort of, you know, ish. One of the main differences in Ireland is that the Presbyterian church tried to organise in a land where it was not the state church - that was very much the remit of the English based Anglican church. Presbyterianism did not operate in Ireland on a parish based system, as in Scotland, and for much of its existence, Presbyterians were discriminated against as much as Roman Catholics were, by Ireland's harsh penal laws, leading to much early Scots-Irish emigration to the United States in the 17th and 18th centuries.

William's new book is an absolute breath of fresh air, because it wholeheartedly addresses the missing link in my understanding of my own church's history, and has quite literally joined many dots together for me to reveal a much bigger picture. Until now, I have carried out a great deal of research in Ireland's Presbyterian records, using PRONI's Guide to Church Records (https://www.nidirect.gov.uk/publications/proni-guide-church-records) to locate the relevant microfilms, and to search through all of them for any particular area in hope of finding my particular research targets. But I never really twigged the main doctrinal differences. In some cases, names of denominations such as the Secession Church or the Covenanters would pop up, and I would assume this was just the Scottish churches of similar names organising in Ireland. And in most cases it both was and it wasn't - some denominations started from a Scottish beginning, but most had their own doctrinal routes in Ireland, and many originated from their own schisms - the Free Church of Scotland is not the same church as Ian Paisley's Free Presbyterian Church. My mother always stated that the Kirk of Scotland could make two stones fight - she clearly had no idea what their cousins were up to in Ireland!

Researching Presbyterian Ancestors in Ireland is structured over 12 chapters. By far the most useful for me were the first, on the many shades of Irish Presbyterianism, and the third, on Presbyterians and their records, with pennies dropping for me on the turning of every page. Additional chapters look at Presbyterian congregations, baptismal and marriage registers, congregational records, the higher church courts, Presbyterian ministers,places of worship and burial, publications, education, other research sources, and some research suggestions. a detailed bibliography and a list of useful archives and libraries completes the work. The book is incredibly easy to follow, with many interesting anecdotes, arranged into digestible sections. There are surprises aplenty, including the discovery that one congregation in County Cavan was part of the Presbytery of Ayr for a bit.

If there was one thing I would suggest was missing, it would be that despite explaining the system of congregations, presbyteries and synods, and identifying how certain congregations belonged to certain higher bodies, there is no comprehensive list explaining which congregations were in particular presbyteries and synods. Again this may be that this is not like Scotland, perhaps does not quite translate in the same way, and so perhaps may not be quite as straightforward to detail.

William's Researching Scots-Irish Ancestors is an essential for Northern Irish research, and some coverage of the Presbyterian churches is featured in that prior to 1800, but this is a necessary and much more detailed expansion on that, making it an essential companion to that work, as well as a valuable guide in its own right. As such, it is highly recommended. The book can be purchased now from the Ulster Historical Foundation for just £9.99 via https://www.booksireland.org.uk/store/all-departments/presbyterian-ancestors. 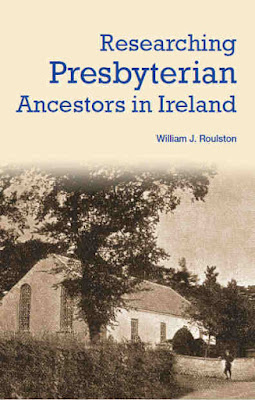