News from the Scottish Indexes conference

At the Scottish Indexes conference yesterday (one of the best yet!), there were a variety of speakers on a range of topics, and some good lively debate at the Q&A sessions! If you were unable to attend, the entire day's proceedings are still available on the Scottish Indexes Group on Facebook for a short period at https://www.facebook.com/groups/scottishindexes/. My own talk on Scottish Marriages is also available for a week at https://youtu.be/0rcWOTykgwc, and is presented below for convenience. (It will remain online until Sunday 18th October 2020.)

At the conference, there were some gleanings of Scottish genealogy news which may be of interest. In addition to the discovery that the Hawick Heritage Hub is now up and running again at a reduced service provision, and offering access to its ScotlandsPeople service (see https://scottishgenes.blogspot.com/2020/10/hawick-heritage-hub-reopens-at-reduced.html), was some interesting news also from Glasgow.

Archivist Dr Irene O'Brien stated that an announcement on the re-opening of the Mitchell Library is expected within the next week, and that the archive service itself will be accessible for three days a week, with restrictions (e.g. productions will need to be ordered in advance, and will need to be quarantined after consultation for a short period). Hopefully if the Mitchell is re-opening the Glasgow registrar's service may also be re-opened to an extent, but we should know soon enough. Irene also advised that it is hoped in the foreseeable future that many new datasets will go online, including the following:

It was also good to hear from Emma Maxwell of Scottish Indexes that the NRS's kirk session records for Scotland, long awaited on ScotlandsPeople, may now be on their way at long last in 2021, with testing currently underway.

The next Scottish Indexes conference is scheduled for December 6th 2020 - details to be announced in due course at www.scottishindexes.com. 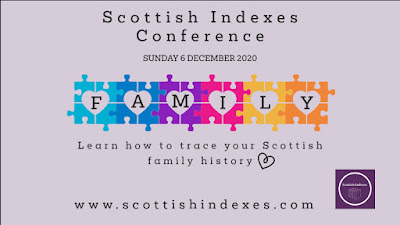 (With thanks to Emma and Graham Maxwell)