The British Library in London has made freely available into the public domain some 18,000 digital images of historic maps, views and texts from its Topographical Collection of King George III. The images have been uploaded to its Flickr account at www.flickr.com/photos/britishlibrary/albums/72157716220271206/, with individual maps searchable through its catalogue at http://explore.bl.uk/primo_library/libweb/action/search.do.

Scotland is represented amongst the materials presented - the following is a plan of Edinburgh Castle from 1746, the year of Bonnie Prince Charlie's failed Jacobite Rising: 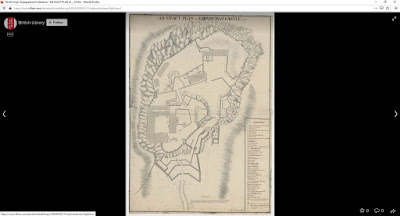 For more on the release visit https://blogs.bl.uk/magnificentmaps/2020/10/the-ktop-18000-digitised-maps-and-views-released.html